At En Izakaya, we are a modern Japanese “izakaya” – a Japanese ‘tavern’, in Carlisle Street, Balaclava that offers a variety of smaller dishes to share, plus a perfectly matched range of Japanese beverages, all in an environment of hand crafted artisan interiors. The perfect atmosphere for friends, food and drink.

I regularly get asked by inquisitive customers how one should eat certain dishes, how much soy sauce or wasabi should be used, the correct techniques while using chopsticks, and many other questions related to etiquette when eating Japanese cuisine.

While we’re all relaxed here at En Izakaya, however, when in Japan, if your etiquette is lacking, (especially in a more formal environment), eyebrows would certainly be raised.

So, in response, here are my recommendations for the more common do’s and don’ts regarding food etiquette in a Japanese restaurant in Japan.

Nigiri sushi refers to a piece of fish that has been placed on a vinegared ball of rice.

Nigiri sushi is traditionally eaten with your fingers, although using chopsticks is acceptable. The correct way to apply soy sauce to a piece of nigiri is to dip the nigiri upside down so the fish touches the soy – not the rice. If you dip the nigiri with the rice facing downwards, then the rice will soak up the soy sauce, and will overpower the flavour of the fish. There is also a high probability that the nigiri will collapse and you will be left with a soy bowl full of rice.

Nigiri sushi has a small spread of wasabi between the fish and the vinegared rice.

Traditionally, diners would accept the sushi chef’s judgement of this quantity. (At En Izakaya, we are far more accommodating with regards to wasabi use). To add more wasabi, mix a little wasabi into your small bowl that contains the soy sauce. If you make a ‘paste’ then that is definitely too much and will kill the taste of the fish itself!

Sashimi refers to delicately & expertly sliced pieces of raw fish – served on its own (no vinegared rice).

There have been heated debates regarding the argument that when eating sashimi, wasabi can be mixed into the soy bowl – as done when eating nigiri sushi. However, spreading the wasabi on each individual piece of sashimi is regarded as the more traditional method.

Chopsticks are utensils that the Japanese (and many other Asian nations) use while eating.

Many people in Australia grow up using a knife, fork and spoon – and are not introduced to the skill of eating with chopsticks. As a result, many Australians are not aware of basic chopstick etiquette.

When eating with chopsticks, the piece of food should enter the mouth, not the actual chopsticks themselves. Don’t lick or suck on your chopsticks.

Not only it is obviously unhygienic but when a Japanese person dies and is cremated, there is a Buddhist ritual where the bones are passed from chopstick to chopstick.

Likewise, sticking your chopsticks in your rice and leaving them upright is a big taboo. Japanese people only do this when the bowl of rice is offered to the spirit of a dead person at their death, or in front of their photograph on a Buddhist altar in their household.

Stabbing food with a chopstick (although this method might seem easier in some instances) is viewed as poor table manners. Chopsticks are like tweezers –and are designed to pick up the piece of food using 2 of them, not 1.

Using chopsticks as drumsticks while at a restaurant is generally not a good look.

I haven’t seen too many Japanese people drumming with their knives and forks in a European restaurant!!
Ladies should not place chopsticks in their hair. Broadly speaking, one should not use one’s chopsticks as hair accessories.

Soy sauce should be used sparingly. Any leftover soy sauce from a meal is considered a waste.
Avoid pouring soy sauce directly onto food – instead you should carefully dip the piece of food into the soy bowl.

Japanese people do not pour soy sauce (or any other sauce for that matter) on their rice. If required, ‘furikake’ (dried rice seasoning), and ‘ajitsuke nori (dried seaweed seasoning) are used instead for flavour and texture.

Soy sauce has a distinct flavour. Many restaurants add subtle ingredients to achieve an ‘umami’ element.

At En Izakaya, we add a little mirin (rice wine), kombu (kelp seaweed), and katsu-o (bonito fish flakes). The sauce is brought to the boil, then immediately cooled and strained. (En Izakaya also have a gluten free & fish free soy sauce available). Chefs spend a great deal of time perfecting their soy sauce with much emphasis placed on which dishes the soy can enhance. Therefore certain actions such as pouring soy sauce into miso soup, or using soy for tempura dishes as a dipping sauce, are discouraged. 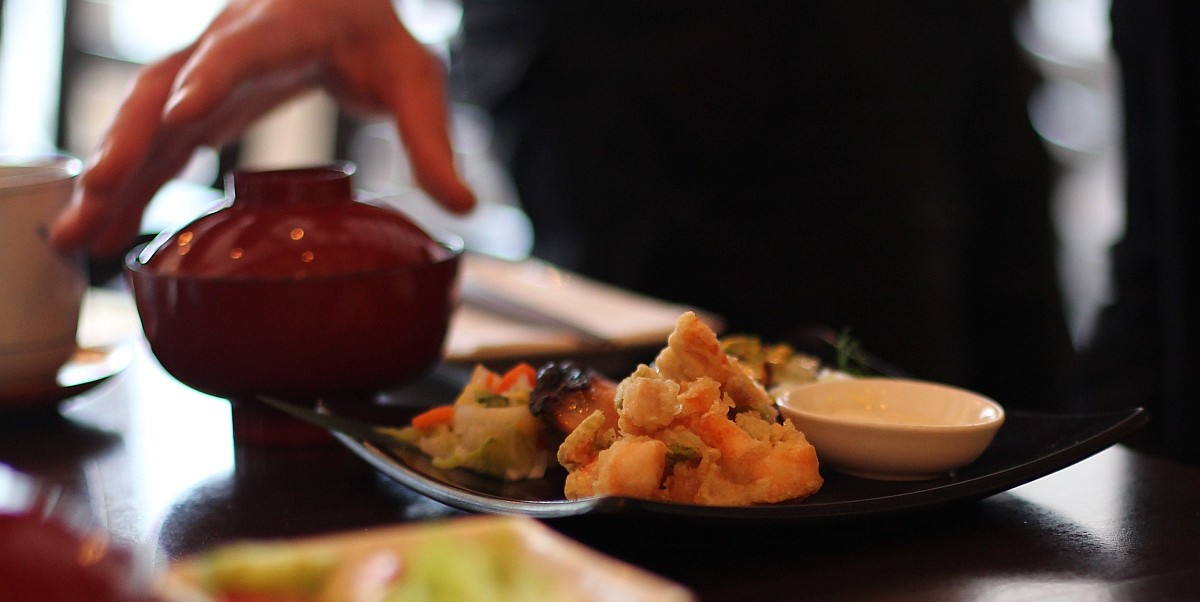 The miso soup bowl is raised with one hand and drunk directly from the bowl. The other hand is used to hold the set of chopsticks in order to eat the seaweed, tofu etc in the soup. Japanese people eat miso soup at the end of the meal, not at the beginning – sometimes the soup is consumed with a bowl of rice and a serve of Japanese pickles. Australians tend to follow the European order of service where soup is traditionally the first course of a meal.

It is well documented that Japan is a society with a wide range of customs that is embedded in their culture. It is these differences in behaviour and mannerisms when compared to western countries, that create intrigue and interest.

Of course it is the individual’s preference whether to follow the Japanese way, but I have found that the majority of foreigners who travel to Japan tend to embrace etiquettes (whether it be in a restaurant for example, or at a business meeting etc).

So, please come in and visit us and enjoy an amazing Melbourne Izakaya experience.