As you can appreciate, En Izakaya has several philosophies and thoughts regarding Japanese cuisine and specifically the growth in popularity of izakaya.

“We feel passionately that Japanese food should be kept simple and at the same time highlighting the ingredients.

Keeping the dish simple doesn’t mean boring food – it’s more to keep menu planning uncomplicated. This can be achieved by using specific ingredients that compliments the main component of the dish in order to make more exciting and balanced flavours.

For example one of the biggest selling dishes at En Izakaya is ‘zuke maguro’ – soy marinated tuna sashimi laced with a spring onion, wasabi and pistachio dressing. Curing the tuna by using soy adds flavour but at the same time draws moisture out of the fish which intensifies the same flavour.  Using konbu (kelp), bonito (shaved dried fish flakes), and dry shiitake mushrooms can add lots of umami and it brings out the natural complex flavours from each of the ingredients without adding salt.”

Umami gets a lot of press these days due to this 5th sense being confirmed by Western scientists in recent times (after salt, sweet, sour & bitter). For those who need a reminder, umami exudes a pleasant savoury taste from different foods.

Colour in Japanese cookery has always been one of the highlights of this cuisine.

“Like all other cuisines, the food has to look appealing. The imaginative use of colours to make a dish look attractive is important. At En Izakaya, we use plates that are different sizes, shapes & colours. We like to use seasonal garnishes (for example, Japanese maple leaves, Ginko nut Leaves) which not only gives vibrancy through their colours, but also subtly indicates a change in seasons.”

The usage of seasonal ingredients is vital in maintaining a balanced menu.

“When we use ingredients that are in season, it means they are super fresh and full of natural flavours. Asparagus is a great example. When it’s in new season (November & December), the taste is so sweet & juicy, but at other times of the year when it’s imported from countries like Mexico and Peru, the taste is notably bland and the texture is harder and stringy. When broad beans and chestnuts are available, we always incorporate them into my menu planning. Customers recognise these changes and the feedback is always great.

Bonito is such a flavoursome fish to use when it’s available in the winter months, and I love the snapper caught from our bay at the end of each year. These two fish are perfect to be served as sashimi – fresh, textural and full of flavour.

The ability to specifically inspect and select our tuna, fresh from being caught, means we can guarantee freshness, quality and flavour.

There is always much customer interest in our chef’s “tools of trade”.

Our chefs prefers the history, tradition and precision, of the traditional single bladed Japanese knives – Yanagiba, Usuba & Deba, which they firmly believes gives a higher precision in cutting and a more complete mouth feel to the ingredient that has been cut. 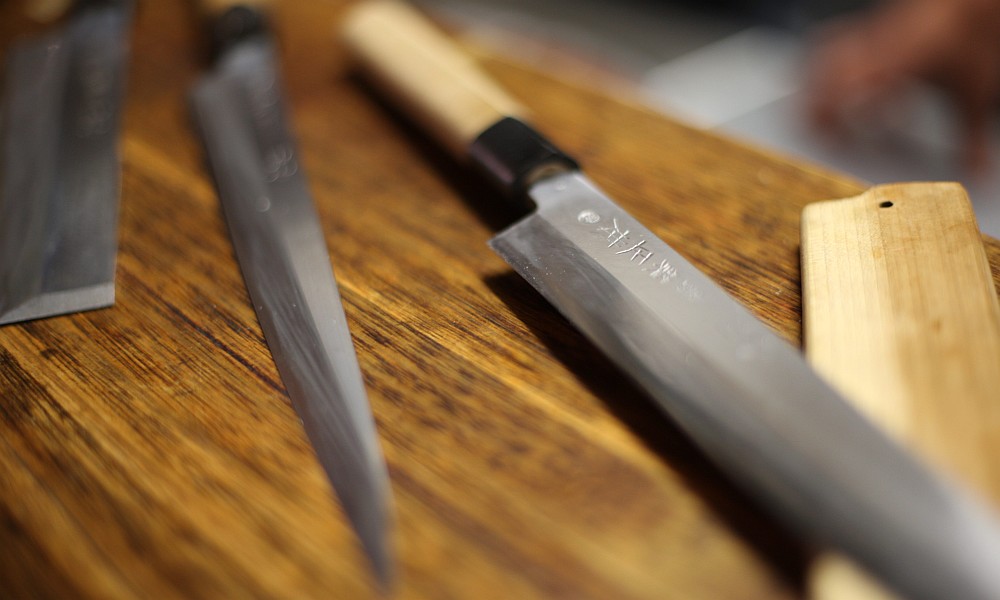 As a team, we have observed the increasing popularity of izakaya in Melbourne over the past decade or so.

“We’re not particularly surprised with the growth of izakaya. More Australians are visiting Japan than ever before, experiencing izakaya and loving it. The opportunity to taste several flavours as opposed to having the traditional entrée and main course, is very appealing to a lot of people.

Izakaya food is not your typical Japanese restaurant food. It is more a collection of small dishes that are designed to be shared amongst friends. The cooking process is more simplified and uncomplicated. The presentation on the plate needs to be reasonably straightforward and uncluttered.”

Izakaya in Japan is regarded as a drinking tavern where customers will purchase a drink and have some food to accompany that drink. It’s kind of similar to pub culture in Australia (although the definition of pub is changing or developing somewhat with the introduction of gastro pubs and other venues with a much stronger focus on food offerings).

We feel that dishes should be designed with a potential beverage in mind for it to be matched with.

“Traditionally a restaurant food menu will be produced entirely on its own merits, and a sommelier or beverage purchaser will match or pair their drinks list with that same food menu. An izakaya in Japan is more beverage focused, so the opposite can occur as well.

When we develop certain dishes, we have a clear picture of what type of beverage should be consumed with it, whether it be sake, shochu, wine or beer – and this makes the whole izakaya experience more complete.”

So what is izakaya food?

Traditionally, there are several commonly listed dishes that many izakaya offer, but at En Izakaya he prefers a more modern approach to his creations.

“Here at En Izakaya, we try to incorporate some subtle western style methods of cookery as well as choice of ingredients – without losing the tradition of Japanese cooking.

We prepare onsen tamago (egg in a hot spring bath) via temperature controlled simmering (sous vide). Each egg is cooked at 68 degrees for 18 minutes.

Rather than offer traditional Japanese desserts, we make use of yuzu (Japanese citrus) in a white chocolate and raspberry cheese cake – a western dessert but with the addition of a Japanese ingredient. We use the same principle for the tiramisu which is still made with marscapone cheese and sponge fingers, but macha (green tea) powder, and azuki (sweet red bean) creates the Japanese flavour. Our chicken, prawn & ginger dumpling is coated with sticky rice instead of a gyoza pastry case. Using alternative methods to create staple Japanese dishes gives En a more modern feel.”

Japanese restaurants in Australia tend to sell a variety of Japanese dishes – ramen, tempura & sushi are a few examples. In Japan, there are restaurants that specifically only sell these dishes.

A typical izakaya in Japan won’t feature donburi  (a bowl of rice with cooked meat, fish or vegetables that is consumed as a meal for one person) on their menu. This also applies to other popular Japanese dishes such as platters of sushi and sashimi.

In Australia, many izakaya still offer these menu items which creates confusion to what the concept of izakaya food is.

We believe that izakaya food is for sharing when meeting friends, unless you’re dining alone of course. From a business perspective we understand the need to provide these menu items if the demand is there from the public, but selling dishes that are part of Japanese cuisine, but not necessarily suitable for an izakaya, doesn’t help with people understanding the difference between a regular Japanese restaurant in Australia and an izakaya in Australia.

So please, come and join us and let the whole En Izakaya team, excite you with our exciting and innovative modern Japanese izakaya experience.